We love the trail centre at Coed Llandegla. The trails are well maintained, achieving the right balance between exhilarating and forgiving. Push yourself, they push back. The food is excellent and accompanied by equally great coffee. Friendly staff, a well stocked shop with mechanics that are not only enthusiastic but brilliant. What more could you ask for?

A quick scan of the Ordnance Survey map, shows plenty of tracks, but you can’t immediately tell which allow cycling. There are lots of bridleways, but all to often they frustratingly peter out into a dead end. Across in England, many bridleways were formed to carry goods across the hills or for droving livestock from farm to market. In this part of Wales, many bridleways lead to water sources and back again rather than being through routes. Great strides are being made to improve connectivity but that still leave room right now for a bit of creativity. 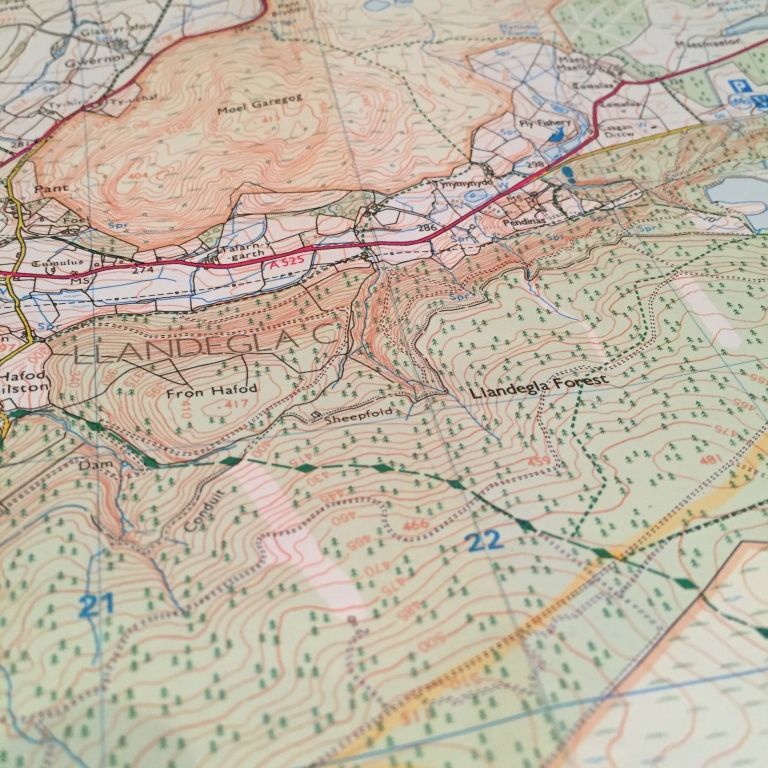 There are some fabulous routes in the Moel Famau area near Ruthin, just a very short drive from Llandegla (find out more here: Ride North Wales – Coed Moel Famau). However, running my fingers across the map I noticed that cutting through the middle of Llandegla is a bridleway, a section of the Offa’s Dyke path which can be legally ridden. If you are riding from the nearby Llyn Rhys campsite to Coed Llandegla, then this is the bridleway which happens to provide the best, legal route into the forest.

But where could this bridleway take us? Si, Stu and I set off to find out.

The Offa’s Dyke path can be easily accessed where it crosses the main climb out from the Coed Llandegla trail head (after the steep bit, past where lots of people stop for a rest, just before the series of bends). The path drops fast and straight, crosses the the Blue Trail and then drops out of the forest next to a small cottage.  As the route basically crosses the garden of the cottage, care and respect was needed – a right of way is not a right to be an arse.

On a quiet tarmac lane, we climbed to meet the Horseshoe Pass road. Busy with hot hatches and motorbikes climbing the Pass, it’s a relief to soon leave the main road, traversing past quarries before picking up the  well marked bridleways along the hillside.

It’s been a bit wet recently and the trail will be completely rideable after just a few days of drying out, rather than the few boggy patches we encountered. But despite the rain, it was an obvious path and climbing up the West side of the Llantysillio Mountains the views out towards Snowdonia were extraordinary and enticing.

As the path started to level out, disaster struck in the form of a thick clod of mud which savaged a drivetrain, rippin a mech-hanger from Si’s Yeti. If you want a lesson in how much chains move around when you pedal, try running a full-susser as a single speed. Four attempts using various combinations of longer and shorter chain lines couldn’t rescue the situation and throwing the US Marine motto to one side, a man was left behind…

Si headed down the road which led back to Llandegla village and then to Coed Llandegla. A useful route to be aware of as it provided the only escape route on the ride without committing to a series of big climbs.

A short climb (yes that word was a feature of the ride) took us to the col on a narrow, mountain road before we struck off down doubletrack along a ridge, the sun shining as we splashed through puddles.

The track ended with the furthest point from the Coed Llandegla start point and we turned South East, dropping down onto a grassy slope with a thin ribbon of trail barely visible. This was a trail rarely ridden, no hoof, wheel or footprints could be seen, broken branches lay scattered on the ground, unbroken by human traffic.

At a farm (Ty-Canol) we briefly lost the way. Knowing that we needed to cross over the series of ridges on the south side of the mountains, we wanted to stay high, not drop down to the valley road. A missing bridleway badge had confused us as we followed the obvious route before we checked the map and climbed (again) up a steep, narrow double-track lane behind the farm which then dropped us into a small farmyard where the right of way ended briefly. To our right, we could see the road we needed to connect to, just a few tantalising feet away. However, we were keen to maintain a legal path, so we checked the map and instead turned up the valley, climbing a steep track before dropping back down to the road. The downhill was fun and the views across the Llangollen valley were more than compensation for the extra climb as we then sped downhill on a narrow farm lane.

Soon enough, the path doubled back on itself into a long, straight climb. This had looked like another annoying, pointless dog leg on the map, but on the ground it became clear that the short distance between the path we were on and the parallel path joined was dominated by a short but very steep hill. The double-back was needed just to make the hill climbable. Technically challenging in places it was rideable to the top where we joined the same road we had previously left Si, but on the other side of the mountain. This confirmed that had we wanted to, we could have shortened the ride by following the road over the col, something worth remembering if riding with less capable riders or if weather closed in.

The next climb took us over the mountain ridge before dropping down a series of fast, flowing zigzags, baby rabbits scattering ahead of us. Another steep climb lead to a long flowing grassy descent onto the road and into Rhewl. New bridleway signs made navigation simple, but the trail was indistinct due to the lack of use – that didn’t stop it being immense fun!

Pedalling along the valley, we stayed high where we could as we knew the  final climb of the day would be brutal. Coed Llandegla was on a hill, we were at the bottom of that hill.

A brief section of the Horseshoe Pass again (this time on the Llangollen side) before we peeled off and joined the long ride up through World’s End. As we climbed we marvelled at the huge scree slopes, hanging above us looking more like something from Utah than the UK. The fast bikes and cars hammering over Horseshoe really had the wrong idea, this was the place to come to be impressed. 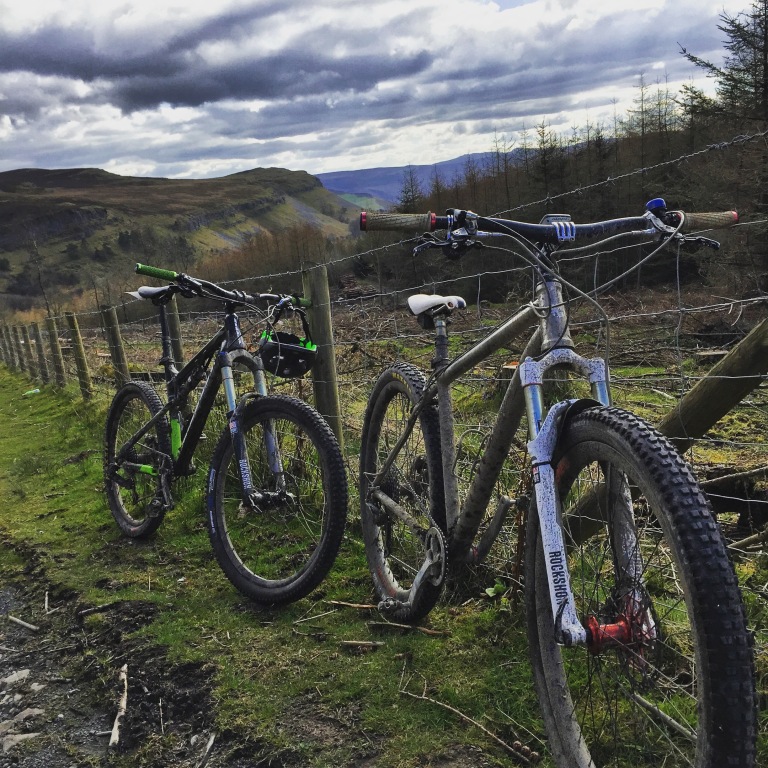 The c. 6km climb took us through valley, forest and across weirs before we emerged onto the moorland at the top of the pass. Ahead of us the whole of the Cheshire Plain was laid out with the West Pennine Moors and Peak District on the Horizon. Many times I’d looked back from those hills towards Wales, now I knew exactly what I was looking at. As we began to pull level with the Coed Llandegla forest we once more we joined Offa’s Dyke Path, this time from the East and climbed across the boggy landscape on a thin trail formed from railway sleepers. 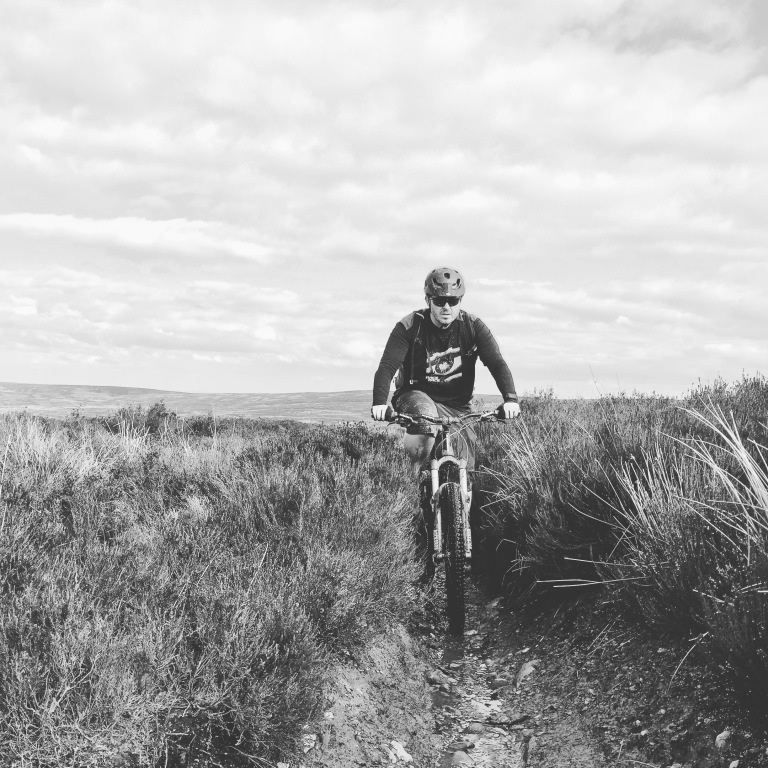 If we’d had a bit more time, we’d probably have taken the opportunity to stick in a quick spin around one of the Coed Llandegla loops, but coffee and cake beckoned, so we dropped down the fire track back to the centre to find Si sat in the afternoon sun.

The 43 km route had taken us nearly 6 hrs including the efforts to keep Si in the ride. 4 hrs of actual ride time could probably reduce a bit in drier weather, but the climbs were all steep or long, or occasionally both!

The route is best described as a challenge, there are the escape routes and shortening options mentioned above, but no opportunities for refreshments once you leave the Horseshoe Path (both on the way out or way back there are cafes / pubs but most of the ride takes place beyond these points). If you can ride up the main climb from Coed Llandegla trail centre, you could ride this route. You might push up a few sections if it is muddy, but a fit rider with good conditions will clear everything.

The trails were not generally technical but that did not stop them being exhilarating and enjoyable. The pleasure comes from being out away from the crowds, pickup up views that span from the spine of the UK almost to the Irish Sea (or would if Snowdonia wasn’t in the way).

A map is recommended, most of the bridleways are freshly marked with badges, but many are not distinct on the ground. Also, due to topology and access rights, sometimes you find yourself taking a turn which may be less than obivous. A GPS is very useful and you can download the .gpx of the route here: Loop From Llandegla GPX File

It’s a thoroughbred cross country route and fully met our objective of finding a legal route from Coed Llandegla and was every bit the “trail less ridden” that we had hoped for, opening up views which few have the chance to witness.

We found our adventure that day and got back in time for cake. Now, go find yours!

One thought on “Off Piste In Wales”